Overview
The Insight Meditation Society (IMS) was founded in 1975 and opened its doors in Barre, MA a year later, in 1976. Unlike traditional Buddhist communities or temples, the IMS is focused solely on the transmission of meditative practices, though very much within the context of the Buddha’s Dharma.

Practices and Facilities
The primary offering of the IMS are meditation retreats at either of two sites on the IMS Barre campus. Retreats last as short as a weekend, and as long as 3 months, though the longer retreats require prior retreat experience. The original mansion, home to the first retreat in 1976, still stands today, albeit upgraded significantly. Deemed the ‘Retreat Center,’ the original facility is host to the majority of IMS programming. The newer ‘Forest Refuge’ facility, opened in 2003, is designed for personal practice of meditation and modeled after the practice of forest dwellers in the Theravada tradition. In fact, personal meditation retreats at the Forest Refuge can last longer than a year. [1]

Though retreats are not limited to participants who are Buddhist, laity or otherwise, during the period of a retreat participants must take the Five Precepts for laity: refrain from harming any living, sentient beings; from taking what is not freely given; to abstain from sexual activity; not to lie, gossip or use harsh or hurtful speech; to abstain from using alcohol or drugs. In addition to precepts against misspeech, IMS meditation retreats are silent retreats, following what the IMS terms ‘noble silence.’ Some retreats at the IMS are led by Buddhist monks, who have ordained and taken monastic vows. For these, retreatants are required to take an additional three precepts: refrain from eating after noon; from dancing, singing and the use of perfumes or cosmetics; and from using “high and luxurious seats and beds.” [2]

In addition to walking and seated meditation, retreatants are expected to participate in ‘work-as-practice’ doing small chores around the facility. Work-as-practice is just one component of an emphasis on community engagement and sustainability at IMS along with a pay-what-you-can sliding scale for tuition.

The IMS offers a very simple life for retreatants. Accommodations are rustic, participants have a single room with a twin bed and a chair, with communal showers. Also, the food served during retreats follows an all vegetarian diet. For participants who are vegan or gluten-free there are substitute options available as well. This simple lifestyle evokes the historical life of Buddhist monks. [3]

Founders and Teachers
The IMS’ three founders did not grow up practicing Buddhism, but discovered a passion for Insight Meditation in college and afterwards. Joseph Goldstein and Jack Kornfield, both volunteers with the Peace Corp, first encountered vipassanā in Thailand while Sharon Salzberg’s interest began during a study abroad trip to India. [4]

The three founders of the IMS met while studying under renowned meditation guru S. N. Goenka. The teachings of Goenka were “Dhamma not as a form of Buddhism, but as a universal path to liberation.” This sort of language is also present in IMS promotional material; the IMS emphasizes the importance of “the Dharma” over the particular dogma of one Buddhist tradition. [5]

The IMS leads a four-year Teacher Training Program (TTP) which is different from traditional monastic education of major Buddhist lineages. The TTP seeks to prepare future teachers of Insight Meditation. Despite the IMS non-traditional position within Western Buddhism—without consistent congregation or practice outside of the retreat format—the TTP does use explicitly Buddhist language to describe the outcomes of the program: TTP alumni seek to “transmit the Buddha’s teachings of liberation,” and “teach the Dharma,” in the form of Insight Meditation.

Teachers at the IMS are not paid which, according to the society, follows in ancient Buddhist tradition of freely offering the Dharma. In lieu of payment, participants are encouraged to provide dana, donations, contributing to teacher income. [6]

Notable ‘Alumni’
The IMS has been home and host to many important figures in the rise of Buddhism and meditation in the West. Perhaps no figure has been more instrumental in the proliferation of meditation practice in the US than Jon Kabat-Zinn. Kabat-Zinn was first a retreatant at the IMS and now serves as a teacher during select retreats. At the University of Massachusetts, Kabat-Zinn founded the Stress Reduction Clinic in 1979 where he introduced the Mindfulness-Based Stress Reduction (MBSR) program. A proponent of secularized meditation, MBSR, Kabat-Zinn says he “applies mindfulness within a scientific rather than a religious frame.” However, MBSR programs are still included at the IMS, despite their non-Buddhist framing. [7]

Congregation and Diversity
As the retreat model does not permit a consistent congregation, the IMS does not have a typical retreatant. However, the IMS does publish information about retreat demographics and its mission for diversity. The IMS notes that early in its history, participants of color and in the LGBTQ community were largely absent. In the last decade or so, however, the IMS has made significant attempts to diversify its programming. In line with Goenka’s teaching that the Dharma is a universal path for liberation, the IMS seeks a variety of participants with a wide range of experience and viewpoints to enrich the practice for all.

One particular issue which the IMS has identified as important to their programming is the dismantling of racism. The IMS publishes that “ racism has been woven into the social, political, legal and economic institutions of the US” showing a deep understanding of the academic, rather than interpersonal understanding of racism. In order to realize this anti-racism vision, one-third of IMS’ Board is made up of people of color, focusing on top-down initiatives. The IMS offers several retreats specifically for people of color, but even in regular retreats offers spaces that are for people of color. There is also financial assistance available for people of color. [8] 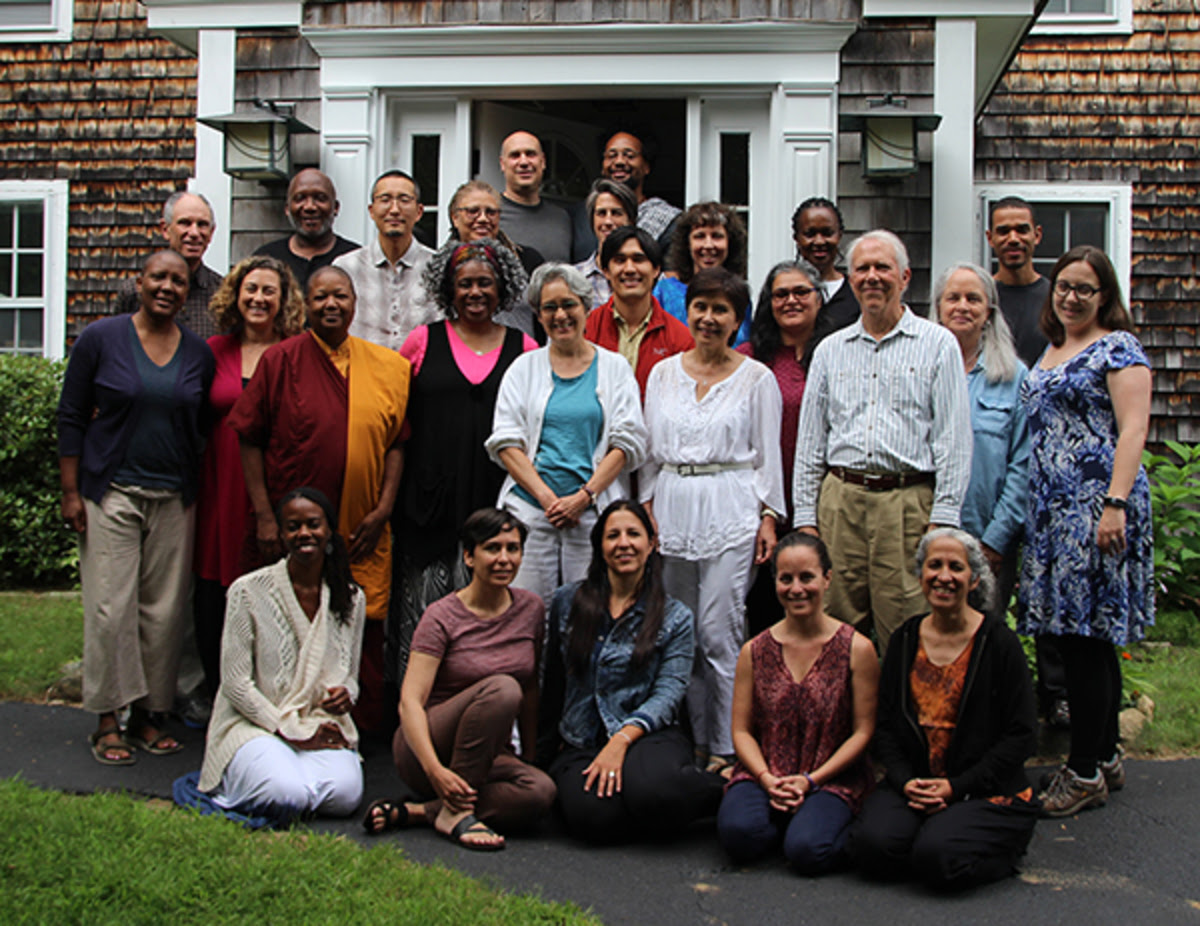 One of the greatest examples of IMS’ commitment to diversity is the latest class of the TTP. The TTP class of 2021, who are currently enrolled in the program, comprises 20 people, 15 of who identify as people of color. The group also has larger representation of gender identity, age, and economic background than in classes before. [9]

Community
Also founded by Joseph Goldstein and Sharon Salzberg, Barre, MA is home to the Barre Center for Buddhist Studies (BCBS). Opened in 1991, the BCBS offers both residential and online courses in the study of Buddhism. BCBS has deep ties to the IMS because of its founders as well as emphasis on meditation practice, however the BCBS curriculum differs from the retreat model of the IMS. The BCBS teachings also vary from the primarily Theravada roots of the IMS, instead offering a variety of early streams of Buddhism. [10]

The IMS is heavily reliant on community support to continue operating. In addition to all retreatants who contribute to the community via work-as-practice, there are dedicated volunteers who stay at the retreat for a month in exchange for working 30 hours a week. Additionally, the IMS is reliant on financial generosity to operate. In 2017 total operating expenses were $4,886,783, of which only 58% was covered by revenue from retreat tuition. The rest is covered by donations and investment income.

According to the latest published report, in 2017 the IMS offered 271 days of teacher-led courses at the Retreat Center, while at the Forest Refuge there was at least one retreatant mediating every day of the year. The IMS was home to 59 teachers this past year, as well as 6 visiting ordained monastics. [11]

Conclusions
The IMS has been critically important to the rise of meditation practice in the United States. Though the IMS does not operate similarly to a traditional sangha, it has had a lasting effect on the landscape of Western Buddhism. The reach of IMS will only continue to grow as it educates more teachers and invites more diverse constituents to the practice of meditation.