The Rocky Mountain Buddhist Center is a constituent of the Triratna Buddhist Community and has been the most central location for the group in the United States since its founding in the early 1990s and full substantiation in 1997. Being part of such a substantial network of temples, retreats, and resources, the Center enjoys its status as one of the most well-known Buddhist centers in the northern midwest.

The Triratna Buddhist Community (Triratna meaning “three jewels,” referring to the Buddha, the Sangha, and the Dharma) was originally known as the Friends of the Western Buddhist Order, and was founded by Dennis Lingwood, who came to be known as Sangharakshita. Originally ordained in a Theravadin order, Sangharakshita expanded his education to a variety of traditions, spending time in Tibet before moving to India where he became known for his outreach to Dalit converts, known as the “Ex-Untouchables.” Sangharakshita played a significant role in the mobilization and conversion of several significant advocates for Dalit rights in India, in part communicating the philosophy of Dr. Bhimroa Ramji Ambedkar, the first Justice and Law Minister of India. Following a 20-year stint in the country, he returned to his country of birth, the United Kingdom, and established the Friends of the Western Buddhist Order. Following a series of accusations of sexual misconduct in the late 1990s, Sangharakshita eventually stepped down as head of the Order in 2000, vesting his powers into a “Board of Preceptors” who continued to oversee the development of the group. The group rebranded as the Triratna Buddhist Community in 2010, and in 2018, Sangharakshita passed away at the age of 93. As of 2008, the Triratna Buddhist Community has a presence in over 20 countries, with more than 1,500 individual members.

(An image of Sangharakshita)

Originally the creation of Alan Sponburg, a local college professor in Asian Studies, the Rocky Mountain Buddhist Center eventually came under the running of Dharmachari Satyloka, who holds the title of Spiritual Director. Satyloka was ordained by Sangharakshita himself in 1984. Under him are eleven ordained order members. The process for ordination in the Triratna Buddhist Community is done via a ceremony in which one becomes a Mitra (Sanskrit for friend), typically carried out at one of the various Triratna retreats throughout the world (in the United States this would be the Aryaloka Buddhist Center in New Hampshire). With the guidance of a Mitra Convenor, one pledges themselves as a follower of the Triratna school with the three following declarations:

Though anyone has the ability to attend Sangha at the Rocky Mountain Buddhist center, the Triratna Buddhist Community itself heavily stresses the importance of undergoing the process to become a Mitra, with many of the resources provided by the group only being readily available to those identified as such. This includes advanced programs on Buddhism and meditation, which act as extensions of publicly-offered, six-week courses and programs on these topics at the Center. Beyond these courses, the Rocky Mountain Buddhist Center offered occasional “Day Sesshins” which were all-day affairs in which people were to sit in and meditate for multiple hours, although this program has not occurred recently and may be discontinued. 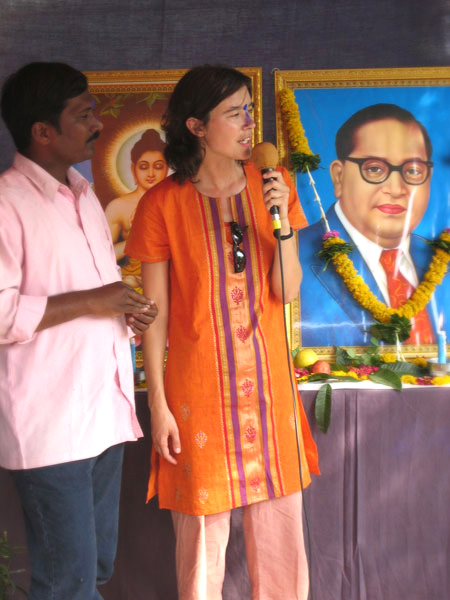 (Part of a Mitra ceremony)

The major regular events held at the Rocky Mountain Buddhist Center revolve around a weekly Sangha that is open to the public (it has been noted that such meetings have been suspended into spring of 2019), as well as monthly guided meditation sessions for women. The Center also opens its doors every Friday for free use of the building for meditation. In terms of meditative praxis, the Triratna Buddhist Community ascribes to its own developed style that is branded as “Wildmind” meditation. This style of meditation ostensibly draws from the Theravadin concept of “Loving-Kindness,” also known as Maitri. The program displayed on the cultivation of Loving-Kindness draws from the same model as that employed by Buddhaghosa, beginning with it being developed towards yourself, and progressing to different parties. However, it also draws heavily from Zen concepts of mindfulness, following in with an explanation of the five types of meditation as explained in the Dhyana Sutras.

This sort of ecumenicism also flows into the general philosophy and thought of the Triratna Buddhist Community. As reflective of Sangharakshita’s religious development, it is the case that the body does not draw exclusively from one Buddhist tradition. Although special emphasis on a textual level seems to be put upon the Pali Canon, the Community also looks elsewhere. The group splits all of Buddhist thought into three discrete categories: wisdom, meditation, and ethics. As stated before, the means of meditation are almost entirely covered by their program of Wildmind Meditation, and it is mostly via textual study, such as with the Pali Canon, that provides the means of coming to an understanding of the knowledge field of wisdom. The ethical dimension is intimately tied to both meditation (as one of the prescribed outward practices) and wisdom (where texts and teachings inform ethical action), and both are drawn upon to ultimately generate what they call the Six Characteristics of the Community:

This openness has not always remained free from scrutiny both from within the Community and from other Buddhist groups, but it has led to several instances of relative progressivism for the movement, such as its concern with LGBT rights. It is well known that Sangharakshita was a member of the LGBT community himself, and although this legacy was shadowed by accusations of the group allowing for coercion and abuse, it did shape the future praxis of the group, leading to LGBT retreats, gender-inclusive practices, and campaigns for equality. It should also be noted that in response to waves of criticism surrounding the actions of Sangharakshita, the Triratna Buddhist Community has worked extensively to salvage its reputation and make amends, actively acknowledging the misconduct of Sangharakshita and others in the earlier decades of the movement. This includes a newly-established “restorative program” in which the group partnered with Restorative Now, a firm that aims to form sustainable plans of action that address systemic issues within an organization. This plan began to get underway in 2016.

Due quite in part to location, the Rocky Mountain Buddhist Center retains a rather small, mostly white following, with only eleven Order Members. For this reason, the Center has never had to move or expand from its original property and location, which it occupies in a sleepy residential area close to the University of Montana’s main campus, indicative of the site’s origins with Professor Sponburg. The group has also been noted for its public presence in the rest of Missoula, Montana, with several publicized events such as outdoor meditations or vigils in the wake of events throughout the world. For instance, the group threw itself into a global peace movement along with the rest of the Triratna Buddhist institutions in the United States following the attack on September 11, 2001. Following on with its proximity to the University of Montana and the school’s robust program pertaining to Southeast Asia, the Rocky Mountain Buddhist Center has acted as a hub for out-of-classroom learning for students interested in Buddhist topics, and thus has remained in close contact with the University.